The inspiration for my work stems from a trip to Jerusalem many years ago. I visited the Wailing Wall and was intrigued by the thousands of wishes and prayers written on paper and crammed between the stones in the wall. I love this idea of leaving something of yourself, perhaps something very personal yet in a public place. I was inspired by the collective focus for so many peoples' hopes and wishes at this ancient site and their interaction with it, much like the Love Letters Wall in Verona and the Love Locks Bridge in Paris. I have also recently incorporated some hand written scripts into my work which are taken from old family letters such as those exchanged by my grandparents during the war in 1944. I overlay and essentially redesign the script so that you can't read the whole letter but can recognise words or parts of sentences which keeps it private yet the final piece will sit in a public place such as a gallery or another's home.

My work features many paper-like scrolls, sometimes single scrolls as a bud vase and other times pushed together to form a sculptural focus on a larger vase. I enjoy using a combination of techniques - slip casting and hand building. The main body of my larger vases is slip cast, then I hand roll scrolls in different sizes and apply them individually.

I use a variety of scroll sizes for visual interest as well as allowing different stem sizes to be accommodated. I have aimed to strike a balance between a sculptural aesthetic and a practical function. 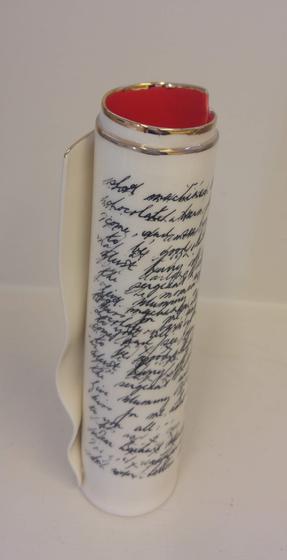 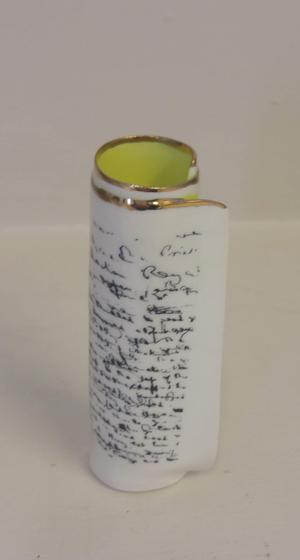